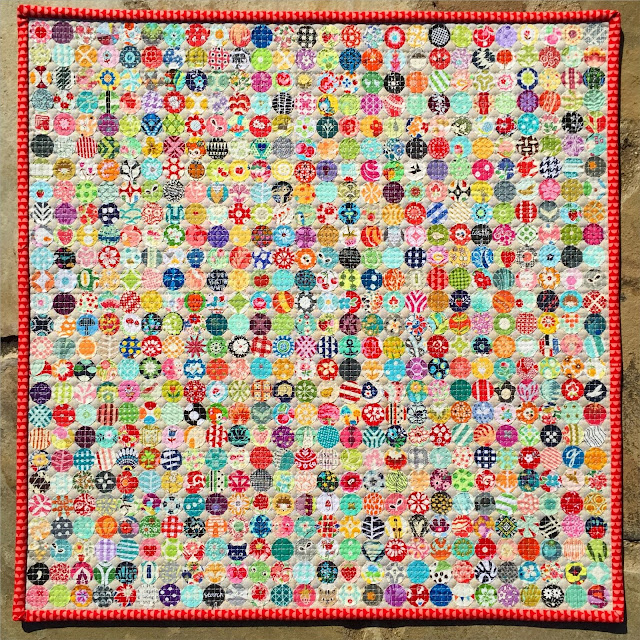 A couple of years ago my daughter made some round fabric covered magnets with my scraps. Sometimes I have a hard time letting go of little odd scraps of beloved fabric, so for part of my "leave no fabric scrap behind" project this year, I decided to clean out some small and cut sections of scraps by making an applique circle mini using the same cutting method that we used for the scraps. It's a bit of an odd method, but it worked out well, and it was a great on-the-go and TV project.

I used a 3/4' magnet I bought at a craft store to trace the outline of the circle on the back of each scrap. Fussy cutting these little circles is so addictive! Both large and small scale fabrics work well to highlight different details; one fabric print cut in different areas can look completely different.

Tip: Press and starch the fabric well prior to cutting to help the fabric hold its shape during cutting and gluing.

To hold the fabric in place to trace, I set the fabric on my metal IKEA tray, and laid the magnet on top. This help keep the fabric from shifting around. I then used my favorite little Singer scissors and carefully scissor cut the circles. My circles aren't all perfectly round, but they worked in the end. 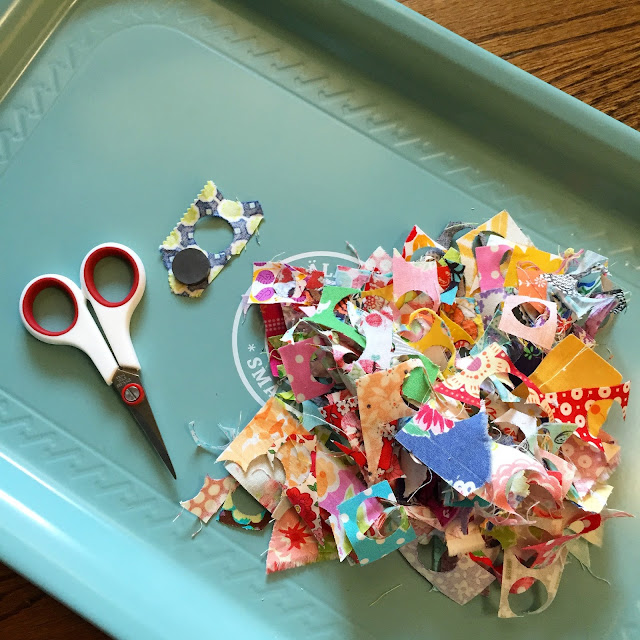 Adhering the circles to the background

I thought 20" finished would be a good size for a mini or a big sofa pillow. I intended to cut my background fabric 20 1/2" square, but somehow I cut it a smidge smaller at 20 3/8". I'd love to tell you it is because I subconsciously knew this would work better, but it was serendipity because it worked perfectly for laying my circles side by side.

The trickiest part was figuring out the best way to attach these without spending a year on it. In the end, I decided that a mini quilt hanging on the wall won't be handled a lot, so I just used Elmer's glue to temporarily baste them to the background. I used a very thin layer Elmer's from a bottle spread across the back - try not to use so much that it soaks through the front of the fabric. I tried a couple using a glue stick and that was not the best method because it pulled on the bias edges of the circle, and also frayed the edges of the circles.

For projects that will get a lot of use - it is probably a good idea to use a product like Heat n Bond Lite to fuse each circle on. I thought I would use it, but the idea of tracing and cutting 1,676 Heat n Bond circles made me sad.

Starting in the lower left hand corner of the background fabric, I laid one circle touching both the side and bottom Hera lines. I then added circles along the bottom row, each side of the circle just barely touching each other, and the bottom of the circles touching the bottom Hera line. Once I figured out that the placement work perfectly, I glued each circle before laying it down and smoothed it in place gently with my fingers.

I continued to work horizontally and sometimes vertically, gluing and placing until all the space was filled, choosing fabric as I went. I worked over the course of several days, little bits at a time when I had a few minutes. 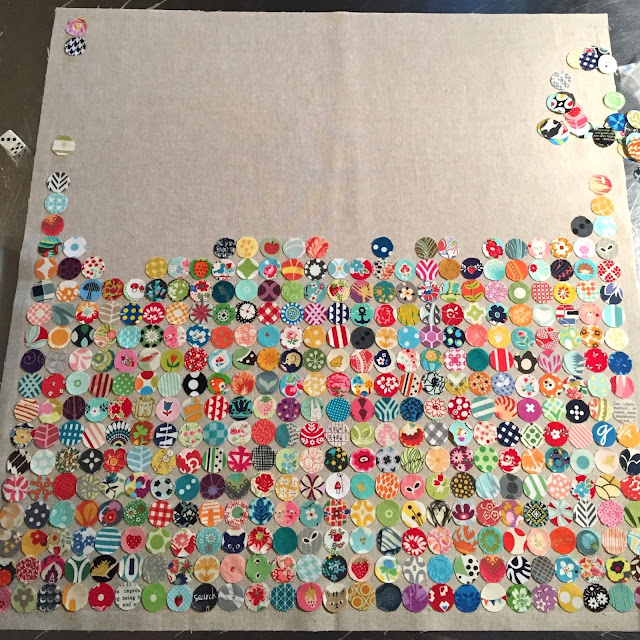 If you look closely, you can see the Hera lines in the photos below. 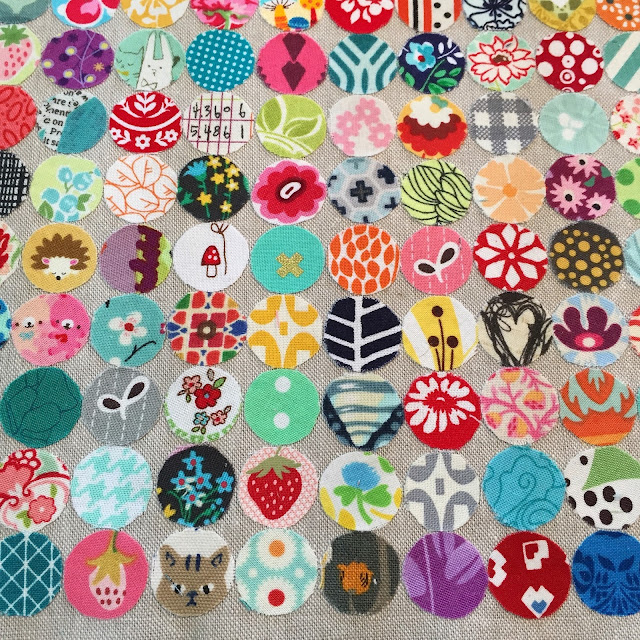 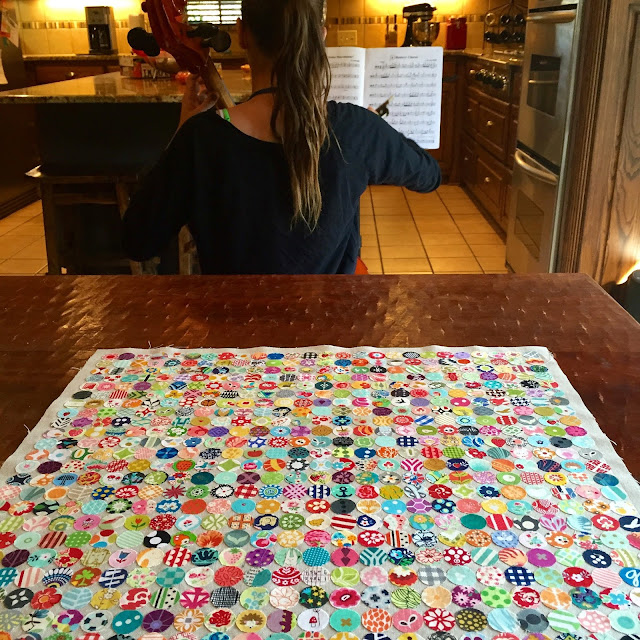 To permanently adhere the circles to the background, I just quilted it densely - one line in the center of each circle, and lines 1/4" left and right of center, going both directions. 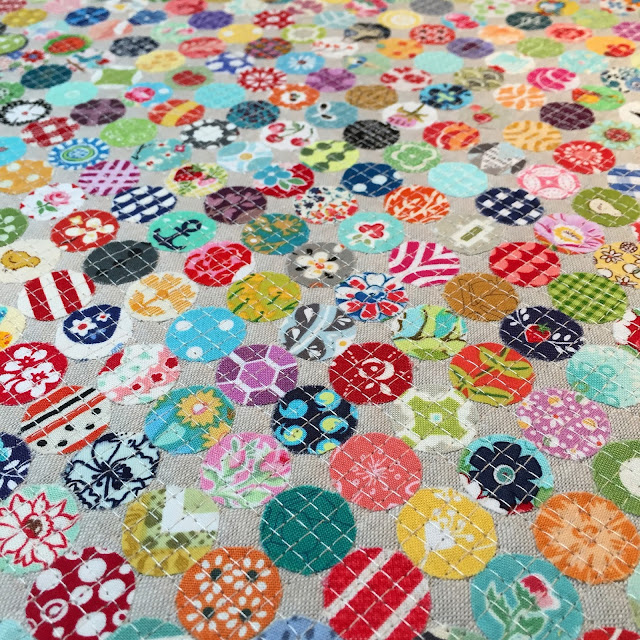 After quilting, I trimmed the edge edge of the quilt to 3/8" from the edge of the circles. Two WOF of strips works perfectly to bind the mini. 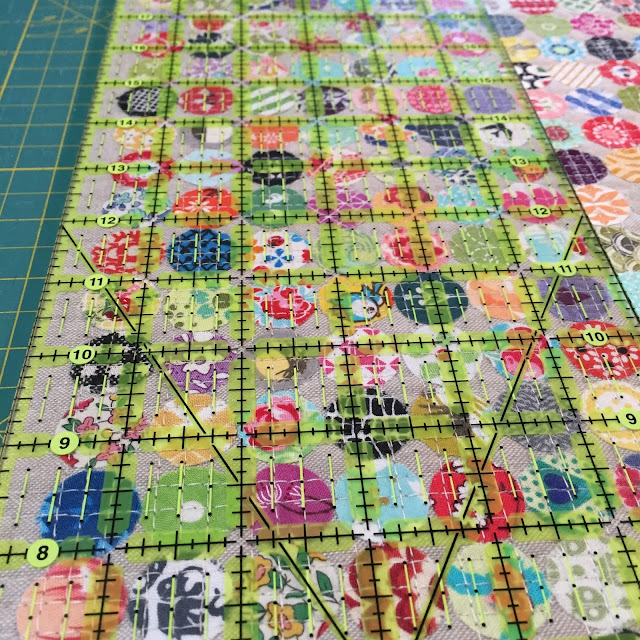 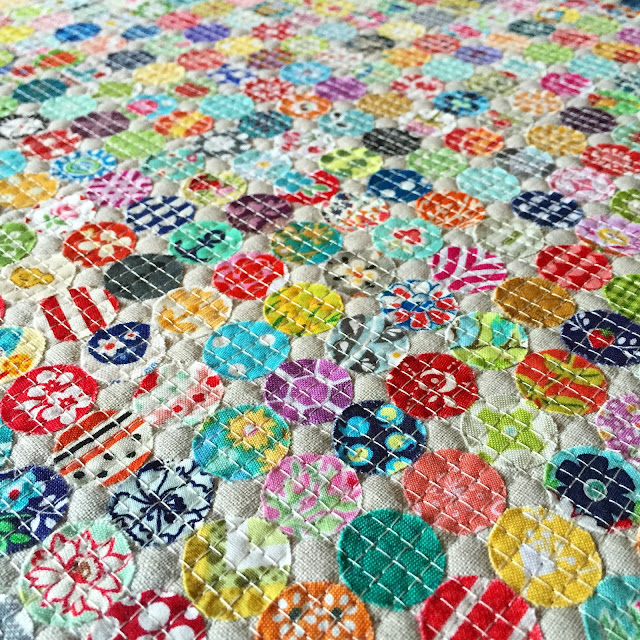 I hope this helps anyone who would like to use up some teeny scraps!
Posted by Three Owls Handmade at 11:07 AM